Medical science has evolved with time and it seems every disease is curable today. What are we witnessing in these times is much advanced solutions to every new and life-changing disease.

Heart disease are one the most complex and case sensitive issues when it comes to human health. The function of heart is to pump blood to the body and beat on normal beat. The irregular heart beat might affect the functionality of heart.

What is Cardio version?

Cardio version is a procedure that uses external electric shocks to restore a normal heart rhythm. It is the conversion of a cardiac (heart) arrhythmia into an alternative cardiac rhythm. Also, it refers to a variety of medical procedures. There are two most common type involve of cardio version either medications (pharmacological cardio version) or electricity (electrical cardio version or defibrillation).

It is a condition in which the heart no longer beats promptly. Instead, it trembles uncontrollably in a way in which blood couldn’t flow. It is a primary cause of sudden cardiac arrest. After which the fibrillation which is called defibrillation plays part using a focused electrical shock that courses through most of the heart muscle cells, causing it to depolarize.

The electrical shock work in two ways one it can be monophasic or biphasic and either direct current (DC) or alternating current (AC).Currently it is manufactured as a biphasic, direct current shock which should be no more than 360 Joules.

The process of defibrillation causes most of the heart muscle cells to depolarize (contract) all at the same time. The sudden depolarization causes an opportunity for the natural pacemakers in the heart, located on the right atrium, to reestablish control of the pace and rate of the heart’s rhythm. It is a form of cardio version because the patient is being cardio-verted from ventricular fibrillation to a cardiac rhythm capable of sustaining life.

Contrary to the first type, second and less common is pulseless ventricular tachycardia. At times of sudden cardiac arrest pulseless ventricular tachycardia can be used to cardiovert unsynchronized electrical shock (defibrillation). It is a condition of cardiac arrhythmia, a condition in which patient’s heart is beating in an organized rhythm, but too fast for the heart to fill with blood between beats and keeps blood flowing.

This process of cardioversion is also called defibrillation even though it is not removing fibrillation but a different lethal arrhythmia.

In these cases, the heart is still able to pump blood and therefore will have a pulse and the patient will be most likely to be conscious.In such cases, an electrical shock delivered at just the right moment in the cycle of a heartbeat can result in a higher chance of successful cardioversion.To monitor the rhythm electrocardiogram(ECG) is performed to deliver an electrical shock at that precise moment requires the shock to be synchronized to the heart’s rhythm.

Adenosine is the newest of the pharmacological cardioversion agents. Adenosine has a transient (short-lived), noncurative effect on ventricular tachycardia and on atrial fibrillation.

Beta-blockers are not always seen as cardio version agents but might be used for long-term control of tachycardia or hypertension (high blood pressure).

Beta-blockers and Calcium channel blockers are similar and can either be used for acute cardio version of supraventricular tachycardia in certain cases or be prescribed for chronic control of recurring tachycardia and hypertension. Calcium channel blockers and beta blockers both can have potentially dangerous side effects if used on a particular type of condition called Wolf-Parkinson-White (WPW) Syndrome.

Through medications like atropine, dopamine, or epinephrine, cardio version’s rhythm is establish into a proper cardiac rhythm. It is used to witness the slow heart rate. For long term treatment bradycardia is implanted.

Defibrillator is used to shock a patient who is not experiencing fibrillation; the heart could be cardioverted into fibrillation. The proper application of defibrillation is needed for this type of cardio version. Only if the patient’s heart is already in ventricular fibrillation only then there is no need of contraindication for defibrillation shock.

Atrial fibrillation is known to develop blood clots in few areas of the heart that can be susceptible for becoming dislodged during cardio version. Due to this reason, anticoagulants are often given before and/or after cardio version.

In contrast, using medications to achieve cardio version can have reactions that are more intense than intended. In such cases, it is necessary to apply corrective measures, either electrically or with other medications. It totally depends on patient’s condition if he reacts too aggressively to the use of atropine and develops ventricular tachycardia; electrical cardio version might be used to convert the heart back into a proper rhythm.

What happens after cardio version is what the biggest concern of most patients is. Right after receiving cardio version, the patient might experience significant improvement in the functionality of heart. Although, the underlying cause of the cardiac dysrhythmia might still be present, which may require additional treatment.

Side Effects of Cardio version

Every medication or treatments have side effects. Side effects of electrical cardio version include pain and irritation at the site of the electrodes, soreness in the chest, and anxiety. Adenosine has an extremely short half-life and the effects of the medication wear off almost immediately. Atropine can make a patient feel very anxious. Beta-blockers and calcium channel blockers have the opposite effect. Most medications for cardio version can also be proarrhythmic, causing a different arrhythmia. 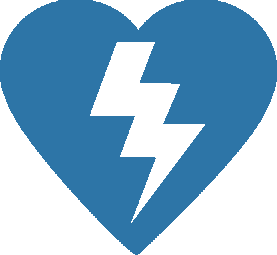 get Trained to Save a Life

Every Person Trained is a Life Saved